From September 1 to 3, 2021, the AI KOREA 2021 event will be hosted by Busan Metropolitan City, the Busan IT Industry Promotion Agency, and BEXCO at the BEXCO venue in Busan. Also heavily involved will be the DSU SW Centered University Project Group, the Dongguk University Institute of East/West Thought, and the Chung-Ang University Humanities Research Institute, all co-hosting the parallel Second Artificial Intelligence Ethics Conference. 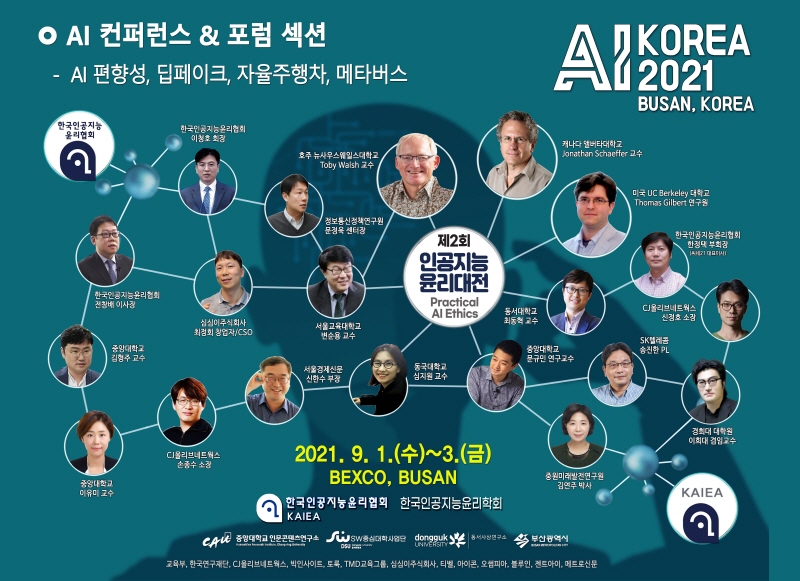 Organized by the Korea Artificial Intelligence Ethics Association, the latter conference is drawing particular attention for being held in the midst of the rise of public concern and debate regarding: self-driving vehicle accident judgment standards, the socioeconomic relationship between cyberspace and ‘real’ society, the merits and demerits of social media based on human-designed algorithms, and the socioethical problems caused by AI biases. Indeed, the conference has been highlighted for its gathering of scholars from all over the world in one place to open the arena of academic discussion.

Dongseo University Associate Professor Choi Dong-hyeok said, “These parallel conferences aim to promote connections with more industries such as manufacturing, medical care, welfare, education, life, and culture by sharing the latest technologies and various visions for the age of artificial intelligence. They will be recognized as important conferences in the field.”

Mun Mi-kyeong, head of DSU’s SW-focused university project division, said, “I think that as artificial intelligence penetrates into our daily lives, these discussions about the occurrence of adverse functions that abuse AI technology are valuable, and must be undertaken sincerely in addition to considering the positive functions and convenience that AI brings. I hope this conference will be an opportunity for everyone to think deeply about the reliability of artificial intelligence.”
목록